Fernando Rodríguez Salas: a painter of ideas and artistic world

How I define myself?

I am a painter of ideas which works on different themes through which I talk about myself. My main medium is acrylic on canvas but sometimes I also use watercolour on paper, markers, pens, coloured pencils and every object I found such as tapes, fabrics or newspapers. In my paintings, each work finds its style according to its topic.

My evolution in painting 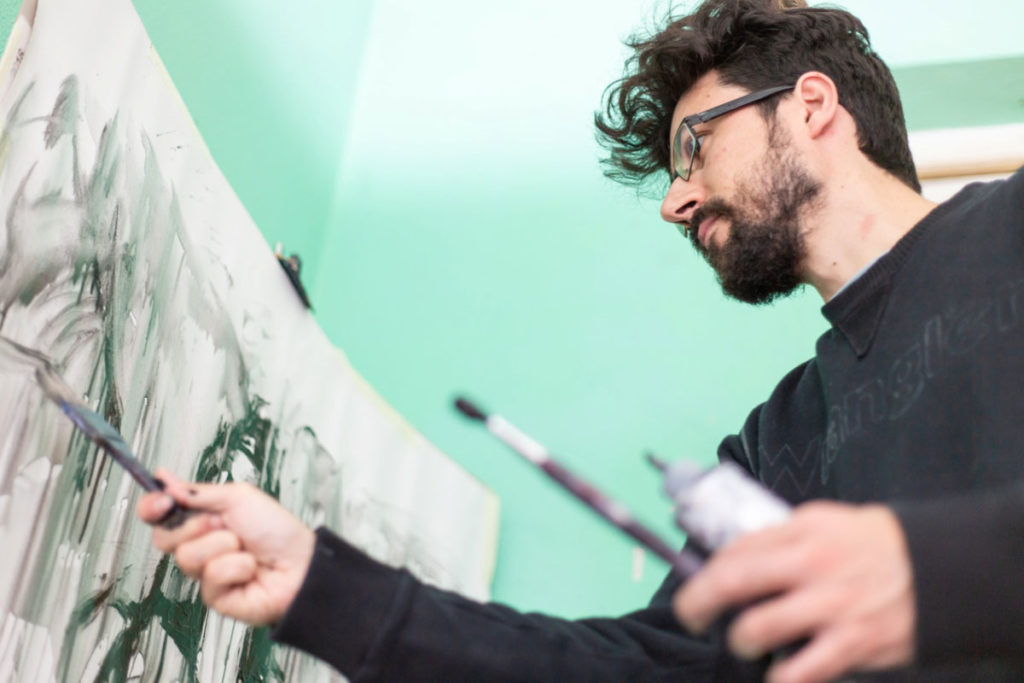 I have always thought that technique in a piece of art, a painting, a film or an action, must exist but never be seen by the viewer. On the contrary, the viewer will realise the deception and the magic of art will disappear just like when we know the trick behind the magic. In other words, there will be not illusionism.

However, most of the times it is believed that illusionism is related to the resemblance of a piece of art to reality. But actually, what is the reality? People usually make the mistake of thinking that the most similar image to reality is photography, but it actually distorts the perspective of things. Otherwise, the reality depends on a certain moment and that moment depends on the person who captures it. So the moment and thoughts and emotions of a person will create a different and more intimate reality. This way, we cannot speak about one reality because every person creates his own one. So every reality is only a point of view and not the truth.

Where is the illusionism in art, then? In the truth of the artist, that is, a way of looking, and every way of looking implies also a way of thinking. Everything consists of the way the artist draws the viewer closer to his world. In order to do so, the artist uses the resource of the form: the maximum exponent of an artwork, which is used according to the technical expertise he has, thus conditioning the result of the work.

This is my idea of what a piece of art has to be, but as I said earlier, the technique must never be seen or the result will be anti-artistic. So the artist has to find a way to express himself in order to attract the viewer to his work and to use the technique just as a way to get what he wants to say and not to show him how good he uses that. Art is not about technique, it is about feelings. The technique is just a way to express feelings. But without feelings and thoughts, there is no art.

I am an artist because I have something to say and I know how to say it. I have a vision of the world different from the others. And this vision has been formed through my experiences in life. 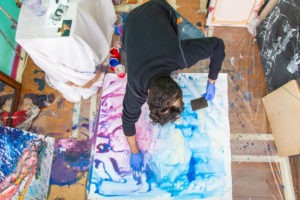 I was born in a city like Barcelona, in an era like the eighties, a place and a moment from which the only things I can remember are the moment when my father took me to a contemporary art gallery and I saw a Karel Appel painting that made a big impression on me; the trading cards of monsters that I exchanged with my classmates; the comics my mother bought for me and my brother; the large movie posters all around the subway; the television programs like video clips of rock stars such as David Bowie, cartoons and movie trailers; and the works of my father when he studied fine arts at University, very influenced by Picasso, and how I loved them.

It is strange but all my vision of life was formed in that place and moment and all I have done since then is strengthening this vision with my readings, movies and music. For this reason, when I moved to Malaga at the age of eight with my family, and later to Granada on my own to study Fine Arts at University, it did not matter what my teachers tried to teach me if it was not among my ideas I was just not interested in. So, since I was disappointed because many of my art teachers only wanted me to develop a specific technique, I decided to look for the inspiration I needed where I found it when I was a child: in films and music, so I went through all the pubs where they played life rock and jazz music as well as watching classic films in the cine-club session in my residence hall Cardenal Cisneros. 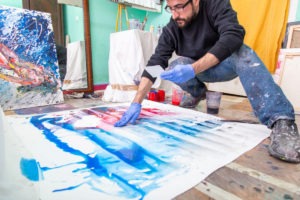 The whole four years at the faculty were a struggle between some of my teachers and me because they wanted me to do what they said, and I wanted to do my will. This has been a constant in my life. It was happening again when I started as a graphic web designer at the age of twenty-four in Madrid. In the beginning, I tried hard to do everything they asked me, but I was anguished because they did not let me express myself as I wanted, so I sought shelter in theatre classes. At that moment I started to experiment as an actor the feeling of freedom I had lost as an employee in a company and I found what I was looking for since I had left painting one year before. I discovered that inspiration came from my own existence.

If in my first journey to England to study graphic design I learnt how to dispose all kind of forms (words, photographs, strokes, lines, colours…) in a structure with a clear intention to say something about a topic, theatre taught me how to use improvisation in art and incorporate it into my artistic process in a natural way. This does not mean I start a painting with a blank mind and no control over what I do. Not at all, I start as an actor does, from a material: the object creates in me the inspiration to do something, either a literature piece, a film, a still film that I have found in a magazine or on the Internet. I never use that in a literal way because the important thing is not the model but what it makes me feel. I interpret what I see through my personal judgments. I just say my opinion about something. It is not the truth, it is my truth. The most important thing is not to lose the spontaneity, even at the risk of betraying the original material to impose my criteria. The only way to do so is allowing the unconscious mind to have a great sway over the making process. In this way, I do not control all the process but I allow the painting surprises me. If I like the result, I keep it even if it is not what I was going to do. If I do not like it, I change it.

I consider art from the point of view of life. I look for identifying myself with a determined topic in order to tell my story. I use art to talk about myself and I use myself to create art. The things that inspire me such as the pub jazz and rock music along with my favourite films, comics and books, are used as my biography in my paintings and I use what happens in my life as content in my works. My existence and the art I create are the same. Finally, in my opinion, in order to express life is necessarily conceiving it with a halo of melancholy which is irremediably linked to beauty as well as to irregularity and chaos that is the natural order of things. 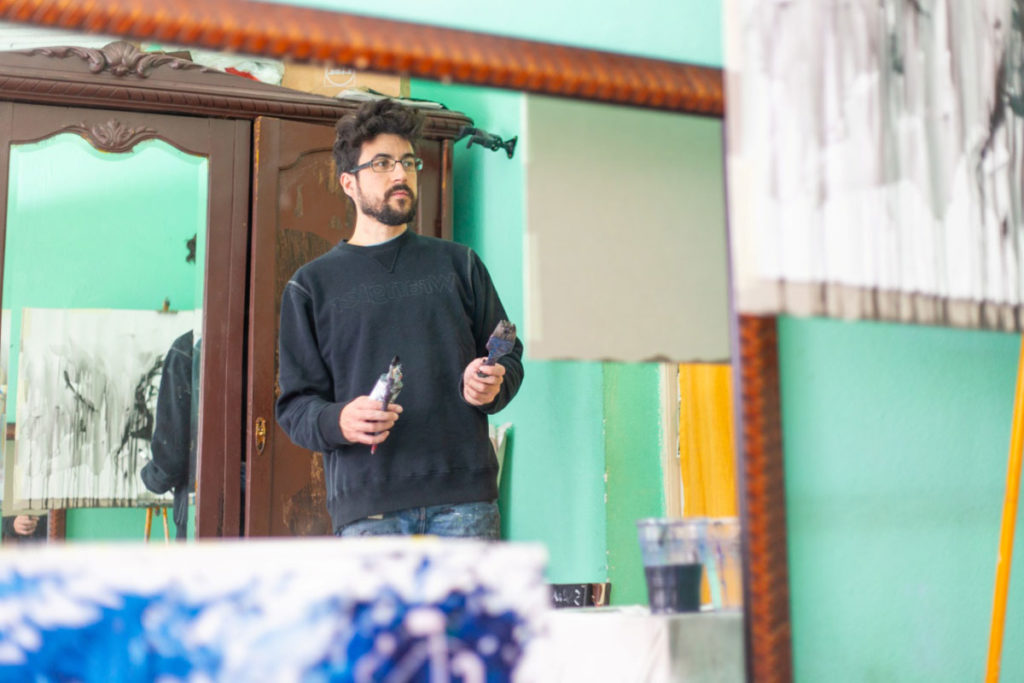 Although the way I paint has suffered changes since I started drawing when I was a child refining each shape on the paper. Since the beginning, my idea has been not to work on external data but looking for the essence of things underneath appearances. Not making a replica of the world but recreating it through my vision. Obeying no rules no discipline and letting myself being carried away by the emotional pressures of the inner, destroying any canon that could block the fluid manifestation of immediate inspiration. Seeing the art as the possibility to break the rules, as the only way of freedom which is allowed to us is within our imagination. In this regard, all my changes have led me to get rid of my artistic loans to be able to listen to my own voice.