Our project began in any given afternoon in Zaragoza. When walking in one of its streets and while passing by a shop, I saw right in the middle of the shop window a painting. The painting showed a battle of one “Spanish Third” in which those widely unknown heroes, with their pikes, swords, arquebus and muskets, were fighting to the death for the benefit of the Spanish empire. However, meritorious and historic act reflected in the painting went unnoticed by the crowd. Suddenly, a child walking and holding his mother´s hand, notices the war image and drags his mother towards the shop window and exclaims: Look, mum, they are fighting! while holding an Incredible Hulk toy on his other hand. 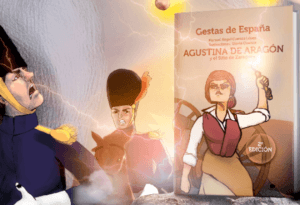 The essence of this story is not the painting of the Spanish Third, but that child´s capacity to be amazed by a past full of amazing feats, by a rich history in culture, values and testimonials from heroes. Those heroes who gave everything from themselves and whose greatest enemy is our forgetfulness. Why everybody is familiar with comic heroes such as Batman, Superman, Captain America or Hulk but almost none of the children are familiar with the heroes of the history of their country? This is precisely the reason why “Gestas de España” was born.

“Gestas de España” is a picture books collection which has been conceived to acquaint children with the great heroes and heroines in our history. These books are storybooks for children told in a virtuous rhyme with great objectivity and historic rigour in which fantastic adventures are narrated. Books that will inculcate future generations with beautiful and important values in order to help them enjoy and understand the history of our country. Heroes such as Blas de Lezo, Agustina de Aragón, Gonzalo Fernández de Córdoba, Ángel Sanz Briz, and a long etc, that will remind us of previous eras where personal courage, heroism and self-sacrifice made the difference between victory and defeat.

But “Gestas de España” is not only about storytelling, but it also plans on building a legacy. Through our books, presentations, storytellers and videos, we are trying to build a didactical, educational and cultural project that teaches important morals, ideals and values such as the value of respect, love for Nature, cooperation, solidarity or empathy among others. This humble adventure, which started with a crowdfunding campaign and in which more than two hundred sponsors joined, has the support of recognized standing publishing houses: Eolas Editions, Esfera de Libros and EDAF.

The first edition of both “Blas de Lezo y la defensa de Cartagena de Indias” and “Agustina de Aragón y el sitio de Zaragoza” flew in one month. They have now reached their second edition. The “Gestas de España” project team includes a historian, a social media response, an illustrator and myself, the author of the book collection. We are already working on both the next book of the collection, “Gonzalo Fernández de Córdoba, El Gran Capitán” and another book which will contain twenty feats aimed at teenagers. These works will be published by the end of this year or the beginning of the next one.

We still have many feats to make known and to share: the glorious charge of Alcántara cavalry regiment, the captives release office of Alfonso XIII, the philanthropic expedition made by Balmis or the Glorioso ship race, among many others which will show the world that Spain had left a profound mark on the history of humanity. As says the famous saying among the ones who love each episode of our historical legacy “No hay puñado de Tierra sin una tumba española.” (There is no handful of land without a Spanish grave)

Manuel Ángel Cuenca López is an active duty officer of the Spanish Air Force and a graduate in industrial organization engineering. He was born in 1989 in the city of Granada. Many of his poems stem from simple memories of that city and it is also the place where his family presently resides. He currently combines his work with his love for writing. Among its works, we can highlight the picture books collection for children, entitled “Gestas de España”.